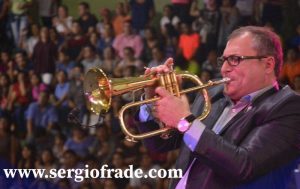 Hello, my name is Sergio Frade and I teach Trumpet in Altrincham and South Manchester/Cheshire generally. I would be happy to offer you a free introductory lesson if you would like to get in touch. Check out my details below. See you soon! Sergio

Sérgio Frade was born in Lisbon, Portugal and started playing the guitar when he was 6 years old. A while after start to be interested in the trumpet and the sound of it. That is when he played the trumpet for the first time at 8 years of age. At the age of 9 Sérgio was playing already in the high range up to what we call double high G. At this time Sérgio was playing classical music.

He played in several Filarmonic Bands all over the country and at the age of Twelve he was already a trumpet solist.
His playing abruptly ended at age 24 after an accident that caused a severe blow to his lip from someone running into him while playing.

Sérgio is a come back trumpet player and started again in 2000. The year of 2002 he found a couple books of Claude Gordon's method while he was living North America. Sérgio Frade studied with Mr Jeff Purtle a Trumpet professor in Anderson University South Carolina. In 2010 Sergio demonstrated how he developed his Double High C at the "Purtle International Brass Conference. The Name Sergio Frade from Portugal apeard in a news paper of The International Trumpet Guild the of 2010 USA. He is well know for his ability of playing Triple Cs.

Sérgio has performed in the CTS Canadian TV show, leads his own SMF-BigBand and a Latin Band called "Latinos&Salsa" , with cuban musicians, in addition to his SMF Jazz 4tet.

Sérgio has recorded for commercial radio and television in Portugal, in Canada participate in CBS TV show with the strings from the Toronto Symphonic Orchestra and for regional projects and recently The SMF-Bigband with Sergio playing some of Maynard Ferguson's tunes such as Gonna Fly Now.

2002 and 2015 - Performed with well known Singer of Gospel music Ana Paula Valadão", in Porto Seguro and in Tabernacles Feast in Jerusalem
2005 - Performed in Canada with the Brasilian Singer Alda Célia
2008 - Trumpet Professor at Music Schools in Portugal
- Performing with the Guitar Player Rahary Tahina - Tahina Jazz Quartet. 2009 - Ensemble of Montemor as a Music Teacher Working for Ministry of Education in Portugal as a Music Teacher. - Apeard with numerous Tribute Bands with concerts booked in Portugal
- Playing at Hotel Palacio Estoril
- Recorded the music of the announcement, recycle batteries in "Pilhão"
2010 - Demonstrated how he developed his Double High C at the "Purtle Brass 2010". - SMF BigBand recording
2011 - Portuguese Golden Globes for the TV SIC"
Performed in South Carolina with great musicians such as Jose Manuel Garcia - Piano, Geraldo Colon Ortiz - Bass, Rob Egan - Drums, Lisandro Quintero - Congas, Doug Norwine - Saxophone, Miguel A. Torres - Trombon, and with the Legend Trumpet Player Harry Kim
2012 - Sérgio Moved to Manchester where has been working as a Freelance Recording musician, and as arranger for some bands. Played in the Screaming BigBand, with well known musicians in U.S.A. such as Harry Kim the founder of The Vine Street Horns ( Phil Collins Tour). Bob O Donnell, Los Angeles Recording Artist (Studios, TV & Theatres). Philippe Schartz the principal Trumpeter of BBC National Orchestra of Wales.
Sergio has been arranged and recorded at The Parr Street Studios in Liverpool, for brass and strings as well. This project it will be released in November 2012 and available at ASDA Stores all over United Kingdom.
The most recent project are:
SERGIO FRADE FaceBook Like page The BIGBAND project presents a Jouney though the Music of Maynard Ferguson and Frank Sinatra Tribute Bigband. In this project is conduted by Sérgio him self.
THE SMF HORNS is a Brass section with Trumpet, Trombone and Sax.
In 2015 Sérgio played In Manchester Jazz Festival - United Kingdom
In 2014 & 2015 & 2016 - participated in the Tabernacles Feast in Jerusalem. Played the National Anthem for the Israeli President Mr Reuven Rivlin.
Sérgio has been playing and traveling all over the Europe and South America.

Fill in an application form and send it to us today. Click here